An early form of circuit breaker was described by Thomas Edison in an 1879 patent application, although his commercial power distribution system used fuses. Its purpose was to protect lighting circuit wiring from accidental short circuits and overloads. A modern miniature circuit breaker similar to the ones now in use was patented by Brown, Boveri & Cie in 1924. Hugo Stotz, an engineer who had sold his company to BBC, was credited as the inventor on DRP (Deutsches Reichspatent) 458392. Stotz's invention was the forerunner of the modern thermal-magnetic breaker commonly used in household load centers to this day. Interconnection of multiple generator sources into an electrical grid required development of circuit breakers with increasing voltage ratings and increased ability to safely interrupt the increasing short circuit currents produced by networks. Simple air-break manual switches produced hazardous arcs when interrupting high currents; these gave way to oil-enclosed contacts, and various forms using directed flow of pressurized air, or of pressurized oil, to cool and interrupt the arc. By 1935, the specially constructed circuit breakers used at the Boulder Dam project use eight series breaks and pressurized oil flow to interrupt faults of up to 2,500 MVA, in three cycles of the AC power frequency.

All circuit breaker systems have common features in their operation. Although details vary substantially depending on the voltage class, current rating and type of the circuit breaker.

Once a fault is detected, the circuit breaker contacts must open to interrupt the circuit; some mechanically-stored energy (using something such as springs or compressed air) contained within the breaker is used to separate the contacts, although some of the energy required may be obtained from the fault current itself. Small circuit breakers may be manually operated, larger units have solenoids to trip the mechanism, and electric motors to restore energy to the springs.

When a current is interrupted, an arc is generated. This arc must be contained, cooled and extinguished in a controlled way, so that the gap between the contacts can again withstand the voltage in the circuit. Different circuit breakers use vacuum, air, insulating gas or oil as the medium the arc forms in. Different techniques are used to extinguish the arc including:

Finally, once the fault condition has been cleared, the contacts must again be closed to restore power to the interrupted circuit.

In larger ratings, oil circuit breakers rely upon vaporization of some of the oil to blast a jet of oil through the arc.

Air circuit breakers may use compressed air to blow out the arc, or alternatively, the contacts are rapidly swung into a small sealed chamber, the escaping of the displaced air thus blowing out the arc.

Circuit breakers are usually able to terminate all current very quickly: typically the arc is extinguished between 30 ms and 150 ms after the mechanism has been tripped, depending upon age and construction of the device. The maximum current value and let-through energy determine the quality of the circuit breakers.

Circuit breakers are rated both by the normal current that they are expected to carry, and the maximum short-circuit current that they can safely interrupt. This latter figure is theampere interrupting capacity (AIC) of the breaker.

Under short-circuit conditions, the calculated maximum prospective short circuit current may be many times the normal, rated current of the circuit. When electrical contacts open to interrupt a large current, there is a tendency for an arc to form between the opened contacts, which would allow the current to continue. This condition can create conductive ionized gases and molten or vaporized metal, which can cause further continuation of the arc, or creation of additional short circuits, potentially resulting in the explosion of the circuit breaker and the equipment that it is installed in. Therefore, circuit breakers must incorporate various features to divide and extinguish the arc. 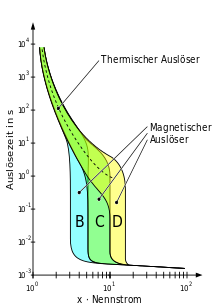 Time till trip versus current as multiple of nominal current

Circuit breakers are also rated by the maximum fault current that they can interrupt; this allows use of more economical devices on systems unlikely to develop the high short-circuit current found on, for example, a large commercial building distribution system.

Front panel of a 1250 A air circuit breaker manufactured by ABB. This low voltage power circuit breaker can be withdrawn from its housing for servicing. Trip characteristics are configurable viaDIP switches on the front panel.

Many different classifications of circuit breakers can be made, based on their features such as voltage class, construction type, interrupting type, and structural features.

Low-voltage (less than 1,000 VAC) types are common in domestic, commercial and industrial application, and include:

There are three main types of MCBs:

In the UK all MCBs must be selected in accordance with BS 7671.

Large low-voltage molded case and power circuit breakers may have electric motor operators so they can open and close under remote control. These may form part of anautomatic transfer switch system for standby power.

Low-voltage circuit breakers are also made for direct-current (DC) applications, such as DC for subway lines. Direct current requires special breakers because the arc is continuous—unlike an AC arc, which tends to go out on each half cycle. A direct current circuit breaker has blow-out coils that generate a magnetic field that rapidly stretches the arc. Small circuit breakers are either installed directly in equipment, or are arranged in abreaker panel. 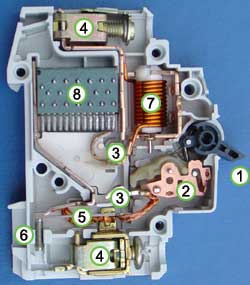 Inside of a circuit breaker

Magnetic circuit breakers use a solenoid (electromagnet) whose pulling force increases with the current. Certain designs utilize electromagnetic forces in addition to those of the solenoid. The circuit breaker contacts are held closed by a latch. As the current in the solenoid increases beyond the rating of the circuit breaker, the solenoid's pull releases the latch, which lets the contacts open by spring action. Some magnetic breakers incorporate a hydraulic time delay feature using a viscous fluid. A spring restrains the core until the current exceeds the breaker rating. During an overload, the speed of the solenoid motion is restricted by the fluid. The delay permits brief current surges beyond normal running current for motor starting, energizing equipment, etc. Short circuit currents provide sufficient solenoid force to release the latch regardless of core position thus bypassing the delay feature. Ambient temperature affects the time delay but does not affect the current rating of a magnetic breaker 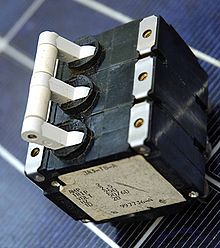 Three-pole common trip breaker for supplying a three-phase device. This breaker has a 2 A rating

When supplying a branch circuit with more than one live conductor, each live conductor must be protected by a breaker pole. To ensure that all live conductors are interrupted when any pole trips, a "common trip" breaker must be used. These may either contain two or three tripping mechanisms within one case, or for small breakers, may externally tie the poles together via their operating handles. Two-pole common trip breakers are common on 120/240-volt systems where 240 volt loads (including major appliances or further distribution boards) span the two live wires. Three-pole common trip breakers are typically used to supply three-phase electric power to large motors or further distribution boards.

Two- and four-pole breakers are used when there is a need to disconnect multiple phase AC, or to disconnect the neutral wire to ensure that no current flows through the neutral wire from other loads connected to the same network when workers may touch the wires during maintenance. Separate circuit breakers must never be used for live and neutral, because if the neutral is disconnected while the live conductor stays connected, a dangerous condition arises: the circuit appears de-energized (appliances don't work), but wires remain live and some RCDs may not trip if someone touches the live wire (because some RCDs need power to trip). This is why only common trip breakers must be used when neutral wire switching is needed.

Medium-voltage circuit breakers can be classified by the medium used to extinguish the arc:

Medium-voltage circuit breakers may be connected into the circuit by bolted connections to bus bars or wires, especially in outdoor switchyards. Medium-voltage circuit breakers in switchgear line-ups are often built with draw-out construction, allowing breaker removal without disturbing power circuit connections, using a motor-operated or hand-cranked mechanism to separate the breaker from its enclosure. Some important manufacturer of VCB from 3.3 kV to 38 kV are ABB, Eaton, Siemens, HHI(Hyundai Heavy Industry), S&C Electric Company, Jyoti and BHEL. 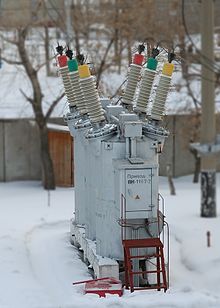 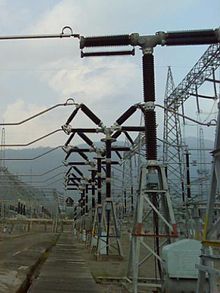 Electrical power transmission networks are protected and controlled by high-voltage breakers. The definition of high voltage varies but in power transmission work is usually thought to be 72.5 kV or higher, according to a recent definition by the International Electrotechnical Commission (IEC). High-voltage breakers are nearly always solenoid-operated, with current sensing protective relays operated throughcurrent transformers. In substations the protective relay scheme can be complex, protecting equipment and buses from various types of overload or ground/earth fault.

High-voltage breakers are broadly classified by the medium used to extinguish the arc.

Due to environmental and cost concerns over insulating oil spills, most new breakers use SF6 gas to quench the arc.

Circuit breakers can be classified as live tank, where the enclosure that contains the breaking mechanism is at line potential, or dead tankwith the enclosure at earth potential. High-voltage AC circuit breakers are routinely available with ratings up to 765 kV. 1,200 kV breakers were launched by Siemens in November 2011,followed by ABB in April the following year.

High-voltage circuit breakers used on transmission systems may be arranged to allow a single pole of a three-phase line to trip, instead of tripping all three poles; for some classes of faults this improves the system stability and availability.

High-voltage direct current circuit breakers are still a field of research as of 2015. Such breakers would be useful to interconnect HVDC transmission systems.

In order to further reduce the required space of substation, as well as simplifying the design and engineering of the substation, a fiber optic current sensor (FOCS) can be integrated with the DCB. A 420 kV DCB with integrated FOCS can reduce a substation’s footprint with over 50% compared to a conventional solution of live tank breakers withdisconnectors and current transformers, due to reduced material and no additional insulation medium.

In 2012 ABB presented a 75 kV high-voltage breaker that uses carbon dioxide as the medium to extinguish the arc. The carbon dioxide breaker works on the same principles as an SF6breaker and can also be produced as a disconnecting circuit breaker. By switching from SF6 to CO2 it is possible to reduce the CO2 emissions by 10 tons during the product’s life cycle.